HarryP (はりーP), also known as Tsubasa Harihara (針原翼) or simply Harry (はりー), is a VOCALOID producer from Kyoto, Japan who primarily uses Hatsune Miku. His most notable work to feature a VOCALOID is Bokura no Let-it-Be.

In parallel with his activities in the VOCALOID field, HarryP is also the vocalist and guitarist of a band named ROZEO EMBLEM. (often indicated as "Harry's band").

In 2015, he made a debut as a writer with the novel ぼくらは、そっとキスをした (Bokura wa, Sotto Kisu o Shita).

On December 2019, he formed the rock band Kuhaku Gokko (空白ごっこ) along with singer-songwriter Setsuko (セツコ) and fellow songwriter koyori. 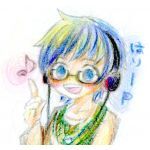