It was initially announced on Jaunary 24, 2020 for global release[1], its in-game BGM and Pet Contests in Piapro was also started in the meanwhile.

The object of this game is "Creating with Everyone"[2] (The Smartphone Game that You Can Join the Making of)[3].

Cheer Power can be obtained by leveling up concert process (confirmed) or rainbow star roulette (in random). It can be used for upgrades of player levels, active skills, or figurines unlocking (and its skill and level upgrades). 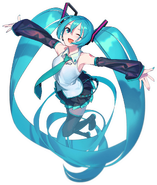 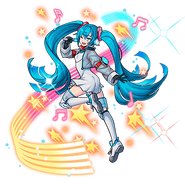 Retrieved from "https://vocaloid.fandom.com/wiki/Hatsune_Miku_-_Tap_Wonder?oldid=1027786"
Community content is available under CC-BY-SA unless otherwise noted.