It was announced on Tokyo Game Show 2012 on September 20, 2012.[2] It was the first game to be developed for Android devices and was released in Japan on November 8, 2012.[3] The Japanese iOS version was later released on December 6, 2012. Like Miku Flick and Miku Flick/02, SEGA also promised a USA/Europe version.

In Hatsune Miku Live Stage Producer, players take on the role of Hatsune Miku’s producer and owner of the live house that she performs at. As her producer, players train Miku using different lessons such as dancing and voice training. Players can train Miku however they want by choosing which ones to improve. Players can also design and customize their live house to increase its popularity.

Once Miku has been trained, she can be entered into contests. Players who do well enough can unlock items for their live house as well as alternate outfits for Miku. The game also features fast-action rhythm aspects that fans are sure to enjoy. Of course, well-known songs and costumes are included in the game. To commemorate the release of the iOS version, new songs, costumes, stages, and items have been released. 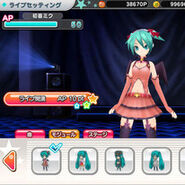 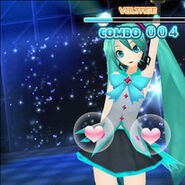 While playing the game. 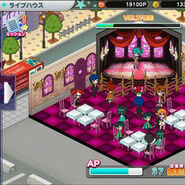 The stage Miku performs on (depending on the song and the outfit.)