On January 18, 2019, Crypton Future Media opened a song contest for fans and producers, instructing them to submit an original song featuring Hatsune Miku which they had produced for the chance to win the Grand Prix. The Grand Prix winner would have his or her song performed at Magical Mirai 2019, win two tickets to the show of their choice, and a ¥100,000 gift card for SONICWIRE. 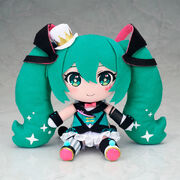 A plush created for Magical Mirai 2019 of Miku in her “Future Circus” costume.

Retrieved from "https://vocaloid.fandom.com/wiki/Hatsune_Miku_Magical_Mirai_2019?oldid=1066957"
Community content is available under CC-BY-SA unless otherwise noted.