The Grand Prize-winning song for 2021 was later announced as “First Note”, composed and produced by blues. 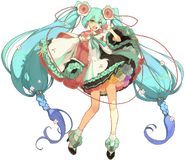 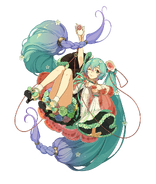 Promotional visual of Magical Mirai 2021 Hatsune Miku for the Blu-ray and DVD of the concert. Illustrated by Hidari.

Miku in her main outfit for the event in Tokyo.

The screen after Magical Mirai 2021 in Osaka ended