In 2014, Crypton expressed an interest in creating a Mandarin Chinese voicebank for Hatsune Miku.[1]

Prior to HATSUNE MIKU EXPO 2016 in China, Wat posted a few tweets that were likely referring to the new Chinese voicebank. He noted that a talkloid in a foreign language was finishing up its tuning.[3] He also wrote that he submitted the president a demo sample featuring the new voicebank and that the beta version of the voicebank had an increased clarity.[4][5]

On April 22, 2017, Miku performed at B.I.G. Carnival 'Banana.IP.Galaxy in Shanghai. At the concert, she performed seven Japanese songs and one Chinese song. This marked the first concert to ever use her Mandarin voicebank.[9][10]

In August, her official website was launched. It was confirmed that her pre-orders would be opened on August 24.[11]

A convention was planned for August 24. At the convention, a new demo for Miku would be presented and attendees would be able to try her voicebank there. In addition, if they pre-ordered her at the event, they would receive a signed card from Hiroyuki Itoh. It was also confirmed that the illustrator for Miku V4 Chinese was Mamenomoto, the official artist of Snow Miku 2016.[12]

On August 23, Miku's new design, box, and package price were revealed on Weibo. While the pre-order was not available yet, the release date was confirmed to be in early September, at least by September 10.[13]

On August 25, it was confirmed that Miku's Chinese package would be available as digital and physical copies. They would also be available for Windows and Mac, and a Piapro Studio standalone version was confirmed to be included. A limited package with additional goods inside would only be sold in Japan.[14]

According to SCLA's and Mikai Music's Taobao shops, she was to be released on September 2, but the date was later changed back to September 10. At these shops, larger packages were supplied with her voicebank and an exclusive keychain for her. Other shops, such as Sonicwire and e-Capsule, carried the smaller packages and digital copies.

Though an announcement regarding her release date was not made clear, Hatsune Miku V4 Chinese was released early around September 5 as people began using and posting their works with her new voicebank. 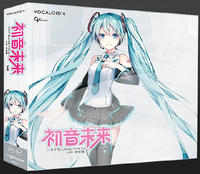 On December 21, 2019, wat announced that a free update for Miku's Chinese voicebank was expected to release on December 23. Users who bought her physical or digital copies would be entitled to the update.[15] This version of the voicebank produced cleaner results and improved pronunciation compared to the original.[16] She also received four demos: three succeeding versions and one brand new original.

It was reported that this update aimed to restore the characteristics of the original Japanese voicebank while taking the cute and sweet voice into account. Utilizing the new technology available, the fluency was also improved.[17]