初音ミク and Future Stars Project mirai is a video game created by SEGA for the Nintendo 3DS.

Project Mirai was released in Japan on March 8, 2012 and is a spin-off to the Project DIVA series and like the Project DIVA games, it's a rhythm based game where players match the music by pressing the appropriate buttons. Along with Miku are the rest of Crypton VOCALOIDs including a special guest, GUMI from Internet Co.

The game uses Nendoroids as the base model and also uses Augmented reality to present itself.[1] It also will be capable of making Augmented Reality 3DS Concerts.[2] It has multiple songs, and multiple chances to switch the voices of the VOCALOID singing, presumably if the VOCALOID is accompanied by other VOCALOIDs.

The Game has many brand new features exclusive to the 3DS, which include:

The game also features MEIKO and KAITO singing in their unreleased VOCALOID2 vocals.

The modules for Project mirai consist of original appearances that are based on popular promotional videos. 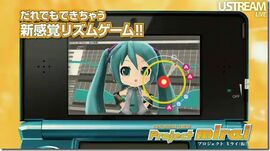 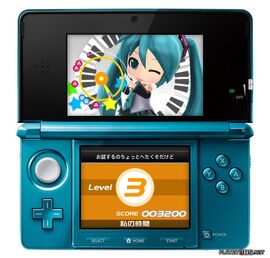