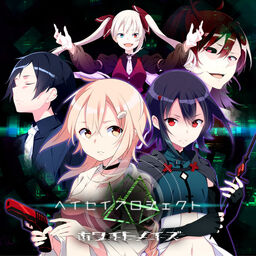 Heisei Project (ヘイセイプロジェクト) is a series of songs by Zips. Not-116 (Iimu) is in charge of the video, Kairiki Bear for the mixing and Nachuki for the bass.[1] Nanase was in charge of the illustration; however he quit for personal reasons. Now Fujino Kou replaces him as the main illustrator and also the character designer. Nevertheless the videos have been illustrated by various illustrators.

The characters of Heisei Project; illust. by Fujino Kou.

Year 20XX: a period with not one discomfort had arrived, and each person lived together comfortably. On the other hand, crimes such as robbery and murders ran rampant.

Although the balance of peace was preserved by eliminating hatred, one day, the world was covered in darkness, and each and every person became a delinquent.

Within the world where both conspiracies swirl, the "story" unfolds.

Retrieved from "https://vocaloid.fandom.com/wiki/Heisei_Project?oldid=1180301"
Community content is available under CC-BY-SA unless otherwise noted.