VFS-01L Hibiki Lui (ヒビキ・ルイ) was a potential Japanese VOCALOID that was announced for the VOCALOID3 engine during the engine's pre-release promotions alongside Ring Suzune. His development status has become unknown. Due to the lack of activity by Vocaloid Next, the project involving Lui and Ring is assumed to be cancelled.

In 2011 the "Everyone's Vocaloid project" (みんなのボカロ計画 / Min-na no Bokaro Keikaku) contest was held. Both entries from within Japan and overseas were allowed. In late May 2011, the contestants were picked out of the thousands of entries. This was one of two designs selected, they were announced at VOCALOID Festa 02.

Lui's release schedule was originally set to be Winter/Spring 2012. Prior to this, in Summer 2012, voice providers both male and female were being interviewed for a suitable voice. However, this has come to past, due to financial reasons for both Ring and Lui. The focus is now primarily Ring, with Lui's current development status being unknown.[1][2]

In late 2013, the VocaNext website became inaccessible making the status of this vocal, as well as Ring Suzune, unknown.

The idea of Ring and Lui was to improve the VOCALOID culture by bridging the gap between fan concept and official products. Therefore, both were intended to be fan made designs for original VOCALOIDs that became official ones.

Like the Kagamines, he and Ring are based on "R and L". "R" and "L" mean "Right and Left", they are the letters found on a set of headphones and sometimes other equipment such as speakers.

He was originally drawn by Yuukari (ユーカリ) and was just known as "Lui" (ルイ / Rui). It is suspected, but not proven the name might have meant to be or based on "Louis". Due to the fickleness of translating the name into Japanese, it was not correctly written in the original concept art. His surname, Hibiki, can mean "sound" or "echo".

Lui was described as being "easily mistaken for a girl because of his graceful manners."

Both Ring and Lui are marketed as fan-based VOCALOIDs having had their mascots designed by fans in a competition. The image was then refined into the final look by a professional artist. Lui appeared on early VOCALOID3 merchandise, but has since appeared on no further merchandise. 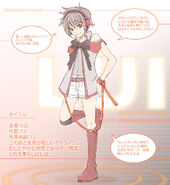 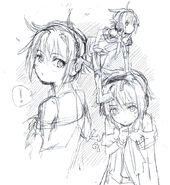