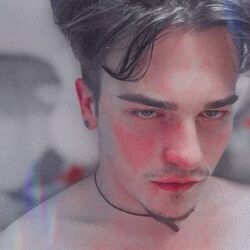 Hidaomari, or Vlad Kolosov is a Russian VOCALOID producer known for his extensive usage of Mew. He is also an illustrator and he edits models for MMD. He made his debut in the VOCALOID community with a VY1 cover of "Circus Monster" in October 2011 but soon began to create his own works. He is a fan of the video game series League of Legends and Warhammer. Hidaomari was born in October 25, 1995 and currently resides in Moscow.

Retrieved from "https://vocaloid.fandom.com/wiki/Hidaomari?oldid=1050936"
Community content is available under CC-BY-SA unless otherwise noted.