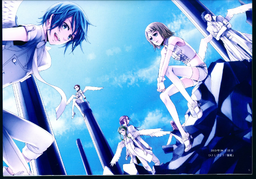 The Himitsu Series is a trilogy of songs made by Hitoshizuku-P and Yama△.

The series focuses on the forbidden love between the Angel Rin and the Human Miku Crynpto, who aren't allowed to be together because love between and angel and human is forbidden. Knowing this, Rin meets with a demon and exchanges one of her wings to become a human male.

The two first songs in the series have been featured on Himitsu ～Mushoku no Chikai～ (秘蜜～無色の誓い～) and STORIA and a third song was released on Polkadodge.

A novelized version was published on September 24, 2012, with much more characters. A book signing was also available with Hitoshizuku-P and Suzunosuke attending on September 29. A book trailer can be seen here.

The story structure of the novel is set up with a prologue, four main story arcs, an epilogue, two additional side stories, and one extra story.

It is revealed in the novel that before Kaito, Rin's previous partner was a cheerful boy with jade green eyes and hair who fell to earth after his wings turned pitch black as he claimed God was cruel. The setting of the story takes place on Alphine, a piece of Heaven's Paradise that fell to earth and has been protected by angels since then. When Rin becomes injured in the human world, she encounters Miku. The moment Rin touches Miku's extended hand, she feels a familiar unbearable sadness. Other important characters such as Lily, the mansion's tailor maid, and Kaito, the archangel, are introduced as the events of the Himitsu songs play out.

VG version of the novel cover

Retrieved from "https://vocaloid.fandom.com/wiki/Himitsu_Series?oldid=844709"
Community content is available under CC-BY-SA unless otherwise noted.