HoneyWorks (ハニーワークス), also known as Haniwa (ハニワ), is a circle consisting mainly of the composers Gom and shito, and the illustrator Yamako, along with many support members.

Some of their most popular songs include "Suki Kirai", "Hatsukoi no Ehon" and "Kokuhaku Yokou Renshuu". Their music style consists mostly of positive rocky songs.

In January 2014 they had their first major debut, with the album "Zutto Maekara Suki Deshita.", which ranked in fourth place on Oricon. In May 2014, the start-up of "CHiCO with HoneyWorks" was announced. Sometime in early 2019, the circle began to include subunits: s×c, a duo comprised of shito and cake; and HoneyMonster, comprised of Gom (Kouto), cake, and Nakanishi. The circle also created a number of fictional idols, such as LIP×LIP and Dolce.

While HoneyWorks continues to put out VOCALOID singles during the Comiket season, most of the VOCALOID songs featured on their official accounts nowadays mainly feature human vocals. 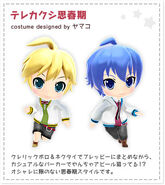 Len and Kaito's costumes for the song "Terekakushi Shishunki", designed by Yamako. From the video game Hatsune Miku Project mirai 2 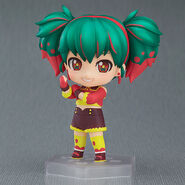