“y'all ready for some didgeridoo :)?”
—GHOST

“tl;dr honey i'm home is about a local lad who is led to believe he's being saved by god, only to realize it's just some f▬k with a control complex running a simulation.  oo edgy.”
—Honey I'm Home explained via Twitter

"Honey I'm Home" is a song featuring DEX by GHOST. The producer provided an explanation for the song on their Twitter after listeners requested one, but they encouraged self-interpretations.[1] While the song has religious themes, it is not meant as a commentary on it and that they simply defaulted back to what they grew up studying.

Norman Minecraft's father believes "the World is an awful place" to be and that ascending to the afterlife is the equivalent of waking up from a nightmare. Under this philosophy he "mercy"-kills his wife.

Growing up with this mindset, Norman questions whether things are real, as if the World is some elaborate set-up and in order to wake up one needs to pass away. He becomes a substance abuser to deal with this process but eventually decides that it's time to "grow up" and pull the plug, feeling that everyone would be alright if he could escape to the supposed real world.

Afterward he meets God and Charon. God confirms Norman's suspicions but clarifies that there's so much more to the situation than meets the eye. He advises Norman to stay by his side so he can show him the truth. But because Norman's father was essentially the heart of this reality, God "eats" father as both the notion of ending the simulation and taking his place as the new caretaker.

Charon instead offers him an easier way out by a kiss, which would poison him. Norman leaves everything behind, wanting to forget all about it, however, upon waking up, it is learned that in the real world Norman's body was being used for public dissection in front of a large audience of angels.

Father said that this world isn't for me
I tried to pray for a new reality
"So, come to me we can change night into day."
A tied up moth seemed to know a different way

Oh,
Father tore out the umbilical cord
There's nothing left in the bottle keeping me scored
We'll abandon the scenery in the
(DON'T REMEMBER IT
DON'T RETURN TO IT)
Rear-view mirror

A petty line of white noise
Pack up your bags and throw out the toys
Three strikes, and "Honey, I'm home!"
Three voices come from the gramophone

A vivisection of me
yielded the start of a mystery
Say "Hello! Honey, I'm home!"
Three voices come from the gramophone

John 3:33
Whoever has accepted it has certified that God is truthful.

God returned with the moth chained to his hand
"There's so many things that you'll never understand…
So come to me, we can change night into day.
You'll hold my hand so you'll never go astray."

God devoured that of father

So, with advice of the dead
and a halo over my head
At last "Honey I'm home!"
Three voices come all alone

A vivisection of me
done by God for all to see
Say "Hello! Honey, I'm home!"
Three voices come all alone 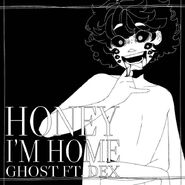 Retrieved from "https://vocaloid.fandom.com/wiki/Honey_I%27m_Home?oldid=979439"
Community content is available under CC-BY-SA unless otherwise noted.