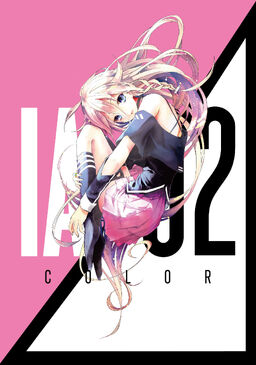 "IA/02 -COLOR-" is IA's second official compilation album by 1st PLACE, released in time to celebrate IA's first anniversary. The songs featured on the album were chosen through competition. The album also features Miku, GUMI, Lily, and miki. Human vocalist Aoi Tada can be heard in the chorus of track 12 on Disc 1.

There are two editions of this album, regular (2CD) and limited (3CD+1DVD). Each of the discs are titled with the name of a color. Both editions include the first CD, titled "Magenta Side", containing 14 tracks, and the second CD, titled "Cyan Side", containing 11 tracks, all of which are sung by IA. The limited edition has additionally a third CD, titled "Yellow Side", which contains a compilation called "IA PROJECT SELECTION 2012 BEST SONG NONSTOP MIX" consisting of 20 tracks sung by IA as well as the other VOCALOIDs.

The last disc of the album, titled "Black Side", is a DVD containing the music video of Neru's "Enmei Chiryou", two MMD videos, an illustration collection and a trial version of VOCALOID3 Library IA -ARIA ON THE PLANETES-. 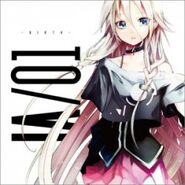 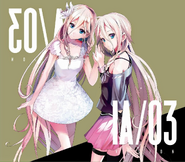 Aside of two additional discs, the limited edition also comes in a different packaging with a double-slip cover and a mini artbook included.