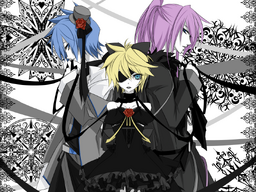 "IMITATION BLACK" is an original song by SCL Project and is one of their most notable songs.

The lyrics are vague, although it seems to be about a love triangle between 2 men and a woman. It also hints that one of the lovers (presumably the woman) is dead.

This song was later rearranged and uploaded as "IMITATION BLACK (2018 LiveVer.)".

The original version has entered the Hall of Legend.

IMPORTANT NOTE: Len's spoken part is not featured here, as it is not written down by the author.

The original version is featured in the albums VanaN'Ice, Vocalogenesis, and LAST COLOR.

Retrieved from "https://vocaloid.fandom.com/wiki/IMITATION_BLACK?oldid=1028541"
Community content is available under CC-BY-SA unless otherwise noted.