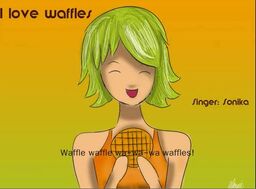 Nanamili's first original song which is dedicated to waffles.


Ah, I just adore them so much
There's big waffles and small waffles and don't forget the toppings.
Waffles, wa-wa-wa.
When I put them in the microwave they still taste just as good.
When I run out I go buy some more and everything will be all good.


Waffles wa-wa-wa (6x)
They make me feel so happy.
When I am mad I eat some tasty waffles with some butter.
Waffles-wa-wa-wa waffles
Ah, They taste yummy with fruit too.
Be healthy will some banana and apples and go eat some
WAFFLES

Retrieved from "https://vocaloid.fandom.com/wiki/I_Love_Waffles?oldid=825235"
Community content is available under CC-BY-SA unless otherwise noted.