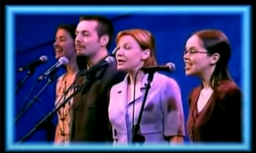 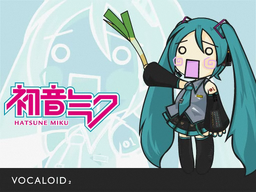 "Ievan Polkka" is a song written in the 1930's, set to a traditional Finnish melody. After falling from popularity it was revived by Finnish band Loituma in the 1990's, and in 2007 a cover by Otomania was released, voiced by Hatsune Miku and accompanied by a video illustrated by Tamago.

At the time there was a popular internet meme called Leekspin, which was based on an animation of Orihime Inoue from the Japanese manga Bleach twirling a negi to an infinite loop of the 5th stanza of "Ievan Polkka". Riding on the popularity of the meme, Hatsune Miku's cover of "Ievan Polkka" became her first popular work. Since then the song has been covered countless more times by other Vocaloids; numerous versions exist, including solos, duets and even a quartet mimicking the original.

The accompanying video to Miku's cover of "Ievan Polkka" features Hachune Miku (はちゅねミク), a blank-eyed doll-like chibi version of Miku. In the video, she waves a negi (also called a Welsh onion or spring onion) in time to the music, establishing the negi as Miku's signature item. Many Vocaloid fans mistake the negi for a leek; however, although a negi does resemble a leek, they are two entirely different vegetables.

Many mistake the title for Levan Polkka, thinking the capital "i" is a lowercase "l".

In October 2020, a meme was created, following the usage of this song, covered by a turkish man named Bilal Göregen.

A World Rife with Hachune Miku

Parts of the song was featured in a commercial for the LG G5 smartphone.

Parts of Miku's lyrics are sampled in the song Bellacoso by Puerto Rican artists Residente and Bad Bunny.

"Ievan Polkka" is traditionally the tutorial song in the Project DIVA games.

Retrieved from "https://vocaloid.fandom.com/wiki/Ievan_Polkka?oldid=1125099"
Community content is available under CC-BY-SA unless otherwise noted.