If the World 2 is the fifth album by Yamashizuku, and a sequel to the earlier If the World, released at Comiket 87. It is a concept album, with each song being based on a different fairy tale. It includes nine tracks featuring various Vocaloids, but mainly Kagamine Rin/Len.

A crossfade can be seen here. 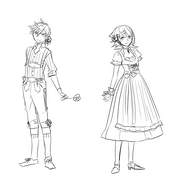 Retrieved from "https://vocaloid.fandom.com/wiki/If_the_World_2?oldid=813575"
Community content is available under CC-BY-SA unless otherwise noted.