This is a list of references and allusion to VOCALOID™ as well as the illustrated vocalists in fan related media.

This list is for fandom media phenomenon only; contributors should not post or link to fan art or fanfiction unless notable to the subject.

Imaichi-tan was a character released in a job-placement ad by a local press in 2011. The character appeared alongside 3 questions asking applicants to identify how the character was lacking in moe. She was dubbed "lacking-in-moe-girl" (いまいち萌えない娘, “Imaichi Moenai Ko”) amongst several other names by Japanese fans and became a popular hit character.[1][2]

She has several VOCALOID related songs including “Lacking-in-moe-girl” and “I’m lacking in something”. There was also a MMD model produced for her.

VOCALOID2 Sweet ANN has an illustrated style based on mid-20th century posters and was inspired by the Bride of Frankenstein mixed with Lena Horne. However, Sweet ANN's boxart bore a meme of the cultural differences between Western and popular Japanese art styles. The original Sweet ANN boxart was deemed "Nightmare fuel" by Japanese VOCALOID fans and became the subject of a number of parodies and jokes, conceiving her boxart as more sinister then it was intended to be. This produced a joke on Nico, in which Sweet ANN is made to shoot beams from her eyes.[3]

VOCALOID4 CYBER DIVA's reveal became notable when comparisons to the entertainer "Lady Gaga" were made on the VOCALOID Otaku forums. Users began basing their works on Chorvaqueen's drawing of the visor by adding it to profile pics, cover art images, on pictures of celebrities, and more. Sometimes these pictures were not related to CYBER DIVA and are simply put there for either cosmetic appeal or just as a joke.[4]

A song where Miku sings about vegetable juice, the dance became a popular internet meme.

Popularized as "Nyan Cat" and "Pop Tart Cat" it sprung from the song "Nyanyanyanyanyanyanya!" sung by Hatsune Miku and produced by daniwellP. The actual song seen in the video, however, is sung by the UTAU, Momo Momone and the artwork is by PRguitarman.

The "Item War" (持ち物戦争, Mochimono Sensou) was an event that used to be a regular occurrence amongst the VOCALOIDs, wherein every new VOCALOID was assigned an item. Items associated with VOCALOIDs began with Hatsune Miku via Hachune Miku in the song cover song "Ievan Polkka" and ended with the introduction of Tako Luka. However, the tradition of assigning items specifically for this purpose was started with the occurrence of KAITO and his rediscovery story which established ice cream as his popular item. This led to other attempts to make internet memes for the remaining VOCALOIDs to establish them with certain items, giving birth to the "Item War" wherein items were pushed to become official, leading to arguments and debates.

By the VOCALOID4 era, reference to even the "confirmed" items had started to wane and by 2018 when VOCALOID5 was released, even Miku's spring onion meme was rarely mentioned.

Nendoroid figurines showing Miku, Len, Rin and Luka in vehicles based on their items. 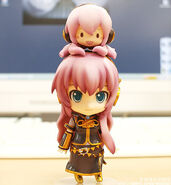 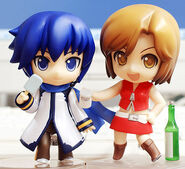 Nendoroid figurines of KAITO and MEIKO referencing their items (an ice-cream and sake). 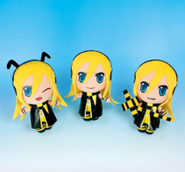 Creating accounts on social medias with the name of a VOCALOID character has become a popular activity within the VOCALOID fandom. The usual activity from these accounts are mainly humorous and nonsense sentences. It is particularly notable on places like Twitter.[7]