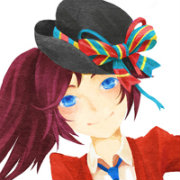 JUSF (JUSF周存; JUSF Zhōucún), also known as Jusflydom and Vanishia, is a Chinese VOCALOID producer who made her debut in July 2012, but was active since 2011. She is known to make darker, gloomier works and her music is described to contain a Western Classical style, but she also specializes in electronic music.

Prior to her debut, she was an amateur lyricist and composer, and created songs featuring Hatsune Miku and the Kagamines at the time. Her song, "Dionysus Chóngbài", became one of the most notable early works of Luo Tianyi and helped JUSF become uniquely remembered within the Chinese fandom due to her specialization in the dark style, making her stand out among other Chinese producers.

In March 2016, she reached 100,000 followers on bilibili, ranking her in second place after ilem.

Retrieved from "https://vocaloid.fandom.com/wiki/JUSF?oldid=1028162"
Community content is available under CC-BY-SA unless otherwise noted.