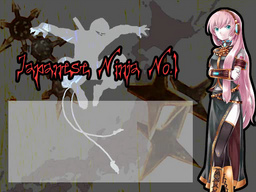 "Japanese Ninja No.1" is one of Deadball-P's most popular songs. It is about a ninja intent on eating Japanese food and stalking girls.

Retrieved from "https://vocaloid.fandom.com/wiki/Japanese_Ninja_No.1?oldid=1089229"
Community content is available under CC-BY-SA unless otherwise noted.