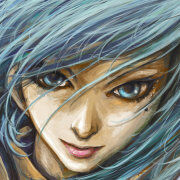 Jiangwuluanwan (绛舞乱丸; Jiàngwǔluànwán), also known as Jimmy and liaowenqi, is a Chinese producer who made his debut in July 2013 but was aware of the VOCALOID software since 2008. He specializes in metal and rock, along with the subcategories of melodic death metal, hardcore punk, and Chinoiserie.

His works are described to be strong, extending to not only his lyrics and tuning, but also the PVs. The songs touch upon real life issues and aspects, and are considered to be thought-provoking within the audience. This makes his works memorable among fans. His most notable song is "Xiāng'ài Xiāng Shā".

While he uses a variety of vocals, especially from the Vsinger cast, majority of his songs feature Yuezheng Ling.

His birthday is February 22, 1986, and he resides in Chaoyang District, Beijing.