For the song by masa, see JOKER. 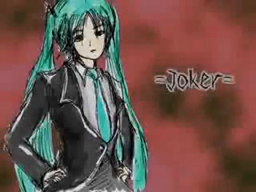 "Joker" is a gothic disco song by turn A studio that seems to be about two girls playing a card game. The original version features Miku, while a popular parallel version by Camui Gackpo was uploaded several months later; both videos have since been removed from Niconico. Five other official versions of the song were uploaded between 2008 and 2011. All of these as well have been removed from Niconico, although official YouTube uploads of the later three exist on turn A studio's channel.

The song is best known for its association with a fanmade MikuMikuDance video created by Chibideko in 2008 that became quite popular among the western fandom. Although the video appears crude when compared to newer MMD PVs, it presented a high level of quality for its time. The three most popular reprints of the video on YouTube have garnered a combined total of over 1,400,000 views.[1][2][3] Many members of the western fandom aren't even aware of the existence of the song's original PV.

Miku's version of "Joker" is featured on the albums KARENT presents Fairy tale & Girl's talk feat. 初音ミク and The anthology.

A still from Chibideko's MMD PV 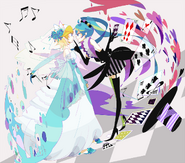 Retrieved from "https://vocaloid.fandom.com/wiki/Joker?oldid=851400"
Community content is available under CC-BY-SA unless otherwise noted.