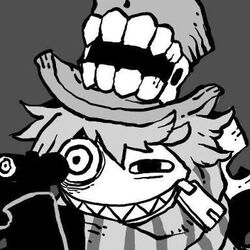 Joruzin or Ankoku DouwaP (暗黒童話P) is a Japanese producer known for "dark fairy tales" songs who debuted in Janury 2011. Joruzin mainly produces songs based on European fairy tales, but also some Japanese and Chinese legends.

As his producer name implies, the songs are indeed fairy tale based, with either a dark or tragic adaptation.

The PVs are usually drawn by 友人Ⅰ (Yujin), aka parallela66. However, other artists such as Saki Sakakibara, MONO-Devoid, and the artist who also illustrated the song The Riddle Solver who can't solve Riddles, has also illustrated Joruzin's PVs.

He started to publish songs on his Piapro in 2011. His most notables works, "Hamelin's Nightmare", "Jekyll", and "Happy Heroine Sniper", reached 130,000+ views on Nico Nico Douga and entered the Hall of Fame.

Add a photo to this gallery
Retrieved from "https://vocaloid.fandom.com/wiki/Joruzin?oldid=1028076"
Community content is available under CC-BY-SA unless otherwise noted.