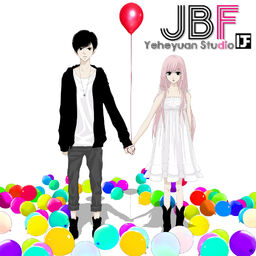 “Two people in love walked up to here. Following the path together, the time came when they noticed that something had changed. What would you choose to do?”
—Author's comment

It is about how a girl (Luka) and a boy's current relationship is going nowhere, and they start to realize their relationship is falling apart. Eventually the singer pulls the plug and breaks up with the other individual. What becomes of the broken-hearted person is up to the viewer.

Though the song is sung by Luka, some fans interpret it as being from the boy's point of view; however, this is not confirmed or supported in any way by the creator, and both interpretations would cause inconsistencies with the PV. Fans' opinions remain divided.

A reply song, "Answer", debuted at Anime Expo 2012 and was later posted on Nico Nico on July 27, 2012. It is set three years after the original song and shows how the girl has moved on.

In 2014, this song was used as a demo for Megurine Luka V4X at Miku Expo. However, the demo featured Rockleetist's English lyrics in order to demonstrate V4X Luka's new English vocals Straight and Soft cross-synthesized with each other.

This song has entered the Hall of Fame. Various covers and remixes of this song have been included in additional albums. Notably, a popular remix by Masakazu Kageyama and a rare album released at Comiket 77, consists entirely of arrangements of the song.

Due to the nature of the controversy, its full explanation shall not be not be posted to prevent reviving old flamewars and attacks against Yunomi-P.

Below is an official English translation: via Producer's approval. Amendments may have been made to the original translation. —by Rockleetist. Used for the development of Megurine Luka V4X English


Early morning yesterday it finally occurred to me.
Just like a puzzle where I had placed every single piece.
And now I don't know what to do-
Now that I see what we're both moving to-
Is this the point in time where we both prayed and hoped we'd be?

Somehow I knew that from the deepest reaches of my heart.
The hardest choice would be the choice that tears us both apart.
And now I know I can't ignore-
All the feelings that I've felt before-
I wonder why I never tried to tell you from the start?


Here in the world of ours that's slowly falling all around us
We're trying to move on, but it's the best we can do.
Our happiness fading- And smiles evading-
The truth within the lies.

Now all I hear are screams between us
resounding and bouncing the echoes throughout my mind.
Nothing is left, nothing remains at the end of the line.
At the end of our chain, we've both run out of time.
So was it fate that brought us together
only to remind us that love's not forever?
I said, 'You know, that's how it goes.'
'That's just the way that life is.'
So no regrets, baby don't fret.
You know I hate to see you cry.

It's time to say goodbye, Just Be Friends.

Last Night a quiet moment helped me bring my thoughts around.
No sense in picking fallen petals up from off the ground.
This flower's past its bloom-
And you know that we can both assume-
Our time is gone, let's move along.
It was never meant to be.

Don't you remember the first summer it was all worthwhile?
Every moment that we spent together made you smile.
Arguments we won't recall-
With no regard to how we felt at all-
Our words were cruel we played the fool.
The end is on our minds.

Oh, somewhere deep in my heart it's raining.
The clouds are remaining to drown me away from you.
I'm driven, but I've had enough.
Our broken heartache's still here.
It seems that no matter what, it simply won't disappear.
The bond between us has finally broken.
There's too much unspoken, we're falling so far apart.
Goodbye my love, it's done sweetheart.
Sayonara, it's the end.
It is time to depart and we will never look back, my friend.


Oh, this one time, just this one time.
If I could make a wish upon a fallen star.
If it came true, I'd stay with you.
Always forever you and I together~

Now all I hear are screams between us
resounding and bouncing the echoes throughout my mind.
Nothing is left, nothing remains at the end of the line.
At the end of our chain, we've both run out of time.
The bond between us has finally broken.
There's too much unspoken, we're falling so far apart.
Goodbye my love, it's done sweetheart.
Sayonara, it's the end.
It is time to depart, but you will always be my best friend.

It's time to say goodbye, Just Be Friends.

Baby it's over for us now
Just Be Friends

The new cover art, Closure, made for the song in Miku Flick/02.

Cover art for the novel adaption

Cover art for the manga adaption

Retrieved from "https://vocaloid.fandom.com/wiki/Just_Be_Friends?oldid=1047118"
Community content is available under CC-BY-SA unless otherwise noted.