Vocaloid Wiki
Register
Don't have an account?
Sign In
Advertisement
in: Producer, Japanese producer, Producer on NicoNico,
and 5 more

KANON69 (奏音69, read Kanon Rock) is a music producer, singer, illustrator and animator. He was born on October 3rd, in Sapporo, Hokkaido, Japan.[1]

Back in the days when he went to junior high school and high school, he had started self-taught various creations such as songwriting and illustration production, which laid the foundation for his current activities.

Since 2009, he's started uploading music on Niconico. The personal circle, Citrus Cat (シトラスキャット), was formed to represent the collaboration between him and the VOCALOID Megurine Luka, whom he mainly utilizes. At the same time, he also posted his own music covers.

In 2014, along with utaite luz and illustrator RAHWIA, he became a member of the circle Royal Scandal (ロイヤルスキャンダル), and was in charge of developing the series as the songwriter, composer and script writer.

He now works as a singer-songwriter, and is currently a member of the jazz band Jam Neko Theater (ジャムネコシアター).

Aside from his work as a singer-songwriter, he is also a Virtual YouTuber under the name Hanayura Kanon. 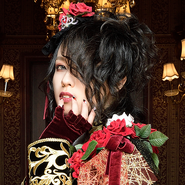