Vocaloid Wiki
Register
Don't have an account?
Sign In
in: Series Work in Progress, Series, Japanese series,
and 9 more 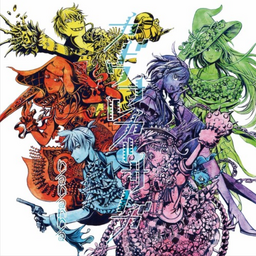 The "Kadoh-anna-ruk-A'" saga tells the stories of the Arka, the inhabitans of Kadoh-anna-ruk-A. Kadoh-anna-ruk-A is a steampunk country. In this world, instead of using oil or coal as fuel, they use souls. After an industrial revolution people are racing to create Machina in order to gather wealth.

The Kadoh-anna-ruk-A saga has a lot of sub-sagas that explore the lives of the main characters of the Lead Princess of the Color Stealing World series, besides Leadia who doesn't seem to live or know of the country at the begining of the series.[1]

Sister Sect Rouge/Thoth (Death God) of Rouge (portrayed by Megurine Luka): A death god pretending to be a nun to get others to believe in her. She seems to know of the Fräulein and Club Majesty[2]

Father Sect Blue Note (portrayed by KAITO): The only one that seems to be able to see through the sister's rouge. Has a strong belief in God and claims he can save the sister but gives up and asks for her to save him [3]

Witch Sing Laika Magic (portrayed by Hatsune Miku): A kind hearted and hopefull witch, she was part of a revolution along with Sophia. She seemed to have a confortable life before the revolution.[4]

Sophia (portrayed by Kagamine Rin): A strong fighter and one of the people that started the revolution she and Laika were in.[5] She is willing to sacrifice both herself and others' lives to achieve her goal.

Lev (portrayed by KAITO): One of the leaders of the revolution.

Auditor Fräulein Biblioteca (portrayed by MEIKO): A senior auditor. She believes the law is just and will do her best to prove when someone is lying in court.

Auditor Justin J. Justify (portrayed by Kamui Gackupo): A junior auditor. He thinks the law is not just and doesn't seem to listen to the Fräulein despite the fact that she's his senior.

Doctor Funkbeat (portrayed by KAITO): Doctor Funkbeat is, what at first glance seems to be, a happy-go-lucky doctor that claims he can give everyone happiness but in reality gives everyone something for them to cope with their misfortune, makes them believe in their hallucinations, such as becaming a famous star just because they think they are one,[6] or gives them medicine[7] and makes them think that it's happiness.[8] He himself seems to like seeing his patients suffer making his most beloved thing "happiness".

He seems to be aware of Princess Leadia since he calls for her in his character song as if she is one of his patients.[9][10] When he finally meets her he helps her a bit with her goal but doesn't seem to like her and despises the fact that she acts like a tragic heroine.[11]

He is often accompanied by Genyas, a mechanised squirrel-like creature who he considers his friend.

Cash (portrayed by Kagamine Len): Cash is an employee of Club Majesty, a place where people use money to sell their souls and be "happy" forever.

Empress Philo (portrayed by Kagamine Rin): The heir to the first emperor of Arc-Jormu, Sophia.