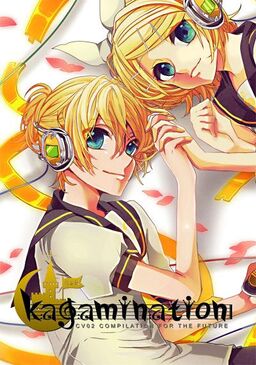 "kagamination" is a compilation of album of a number of producers, such as mothy, Hitoshizuku-P, cosMo, Owata-P and more, also a number of well known illustrators, such as Tama, Zashiki Usagi-P, Soriku, and more.

At first the album was intended to be released on May, however due to the earthquake incident in March of 2011, it was delayed with only 6 tracks available on the album on kagamination -ZERO-. One month later, the complete version "kagamination" was released on June for VOC@M@S 12.

A sequel was also in production due oin October 2012 entitled "kagamination LOVERS" with over 50 illustrators (some new, some old), and the producers' list was to be announced in late August 2012. It is assumed to be cancelled.

The CD comes with a 20 pages full-color booklet, and this is one of the largest Kagamine compilation album, with over 30 producers, and 30 illustrators (it makes a total of 60 producers). 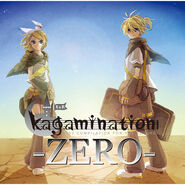