This article is about the VOCALOID4 software known as a voicebank. If you are looking for the VOCALOID characters then click here.

In November 2013, the Kagamines' package was being worked on along with an English version.[1]

At the end of 2013, Wat stated he was working on the personality of the Kagamine and Megurine Luka vocals.[2] Wat also mentioned that he was meeting increased challenges in the new year. After 10 days, he was finally able to work on configuring the Kagamine vocals.[3]

In January 2014, Wat revealed that due to the change in wavelength for VOCALOID3, he was re-evaluating ACT1 and "POWER" Rin and Len.[4] Wat said that the early Rin voice had a strong feeling to it.[5] He also said that the situation with MEIKO V3 "Power" was similar with the Kagamine Act1 package. MEIKO's "Power" vocal was recorded in 2009 and did not produce good results on the VOCALOID2 engine, so the decision was made to delay it until the VOCALOID3 engine. However, it was brought out again in 2013. Based on this, Wat mentioned it may be possible to also bring Act1 back.[6]

After finishing the recording for the new Rin vocals, Wat felt that the shift to V3 proved to be a good one, especially for the "Power" Append.[7] Wat thought that the Kagamines needed adjusting to give them a bigger vocal range.[8] After working on the voices for a week, Wat decided that it was time to return to working on Megurine Luka V3.[9] According to him, Rin's power and stretch notes are her strength. They were doing some research to continue to improve them.[10]

Later, Len's high notes were discussed. They were in the process of improving along with the low frequency of the Kagamine voices. Aside from triphones, new recording material was added to their voices.[11]

In late October, PowerFX's Bil Bryant revealed that their new vocal RUBY was due to be released before Christmas 2014. However since VOCALOID4 was soon to be announced, they were holding her back. In light of this, Wat was asked about Luka's status. The title of the product was mentioned and Wat referred to Luka as "New Luka" instead of "Luka V3". While it was not a confirmation that she is due for a V4 release, he did confirm otherwise.[12] The Kagamines were not reported on, but they were stated to be due in the third quarter of 2015 while Luka was due in the first quarter.

On November 21, Wat shared that the Kagamines were going to be a V4X title like Luka. At this time, they were testing and implementing E.V.E.C on the duo VOCALOIDs.[13]

In late December, Wat tweeted that the new V4 update was about 35% complete.[14] Wat also mentioned that they were aiming for variations of strength in their vocals and control of the vocals' force.[15]

In February 2015, Wat reported that they will focus on the Kagamine V4X product upon the release of Megurine Luka V4X.[16]

In March, the subject of their "Power" voice library was brought up.[17]

It was confirmed that fixes to the Kagamine voices would happen by mid-May: the focus being on sound quality and pronunciations. If all went well, samples would be posted of the progress.[18]

On July 18, Rin's POWER voicebank was nearly complete and her WARM voicebank would be worked upon next.[20] On August 1, it was noted that the Kagamines may be delayed to a late 2015 release.[21] In August, a product page for Kagamine V4X was launched, placing their expected release in December 2015.[22]

On October 23, Wat tweeted that a demo song was in the works for the pair.[23] On October 29, following the release of the demo "Tokyo Zombie Land", the main page was updated. According to it, Rin received updates to her POWER, WARM, and SWEET voicebanks, while Len received updates to his POWER, COLD, and SERIOUS voicebanks. E.V.E.C. was only available to both VOCALOIDs' POWER voicebanks. The Voice Colors only included POWER and SOFT. In addition, it was confirmed that the Japanese package could be bought on its own or as a bundle with the English package.[24]

During November, design teases were made. On the 15th, it was announced that their full design would be unveiled the following weekend.[25] 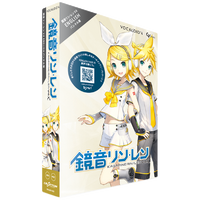