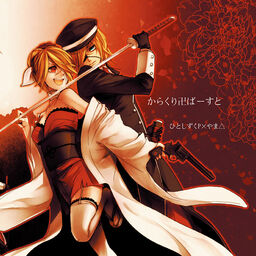 The Karakuri Series is a group of songs that begins with Karakuri卍Burst; along with two more songs that were released on team OS' (Hitoshizuku-P x Yama x Suzunosuke) first mini album with the same name からくり卍ばーすと and the fourth on Mistletoe ~Kamigami no Yadorigi~ (ミスルトウ～神々の宿り木～) album. At first, the song Karakuri卍Burst was not intended to be a Series. However, Hitoshizuku-P later edited her video description announcing the mini album, linking the video to "The Karakuri Series' CD".

Along with the mini album, Suzunosuke, the illustrator of the song, has released a doujinshi regarding the Series. Her doujinshi has a similar, or in fact presumably the same plot to Hitoshizuku-P x Yama's series. Suzunosuke's doujinshi is currently ongoing, with its first volume first distributed on Comiket80. The second volume was said to be released on Winter Comiket on 2011 but it was delayed.

On November ninth, 2015, Hitoshizuku announced via twitter that a two-part novel series would be released in November and December respectively. On November 16, an official trailer for the novels was released on youtube. The two light novels can be ordered here and here on Amazon.jp.

A fifth installment was be released on VersuS, which is a song sung from the perspective of Miku.

The story starts with Kaito, wearing the costume he wore in the song Karakuri Burst. The country is in chaos as he walks around the neighborhood. He sees an injured man (presumably Len, for his right eye is covered in blood and later in Karakuri Burst he wears an eye patch), whispering about his mother and father. Leon, who is also an officer like Kaito, greets him and they have a little chat regarding "Karakuri".

The scene then closes and switches to a rather peaceful mood. It is an orphanage, and they have a new young boy on board. He introduces himself as Len, while the other kids whisper, saying that he looks oddly similar to another girl in the room. Len later leaves and takes a rest under a tree to be alone; or at least he thinks that he's alone. Rin greets him and asks what he is doing. She brings up the topic of the other kids in the orphanage thinking that they look alike, like twins.

The girl introduces herself as "Rin" and sits down next to him. They move on with their conversation, chatting casually. Rin had been in the orphanage for two years, and realizes they are getting along very well, each telling their story. Len tells her that his house is gone thanks to the Karakuri, as were his mother and father. So ends volume 1, as a cliffhanger. The last pages of the doujinshi were concept arts of Ren and Tsubaki's costumes in the song Karakuri卍Burst.

Note: The order of the series is based on the Karakuri Burst' album order.

Suzunosuke's concept art for the other characters

The cover for Karakuri卍Burst Flash of the White Wolf

The cover for Karakuri卍Burst Funeral of the Red Camellia

Full cover of Flash of the White Wolf

Full cover of The Funeral of the Red Camellia 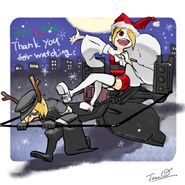 Illustration of Ren and Tsubaki for Christmas by TSO

Retrieved from "https://vocaloid.fandom.com/wiki/Karakuri_Series?oldid=843102"
Community content is available under CC-BY-SA unless otherwise noted.