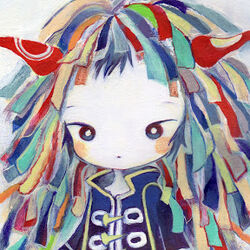 Kikuo (きくお) is a producer with steady popularity. His songs are known for having dark subjects paired with upbeat music. His use of unique instrumental textures, harmonies, and sound effects, along with a high level of attention to detail, gives his music a singular sound.