The following are a list of Vocaloids that use Korean.

The phonetic system for Korean Vocaloids uses less standard transcription compared to the typical notation used by other languages that are based on X-SAMPA. This is somewhat due to the nature of hangul, which already functions as a phonetic alphabet. Unlike English and Japanese which classifies stop consonants based on voiced and unvoiced pairs, Korean distinguishes between three sets of initial stop consonants; plain, tense and aspirated. As a result, Korean does not distinguish between unvoiced [k] and voiced [g]; rather, both are allophones of a single phoneme /k/. This can cause confusion for users as the similar transcriptions for consonant phonemes in Korean do not match the sounds in other languages. Korean syllables are traditionally separated into three parts: CVC (Consonant-Vowel-Consonant). However the vowel may include a glide, which causes another major difference between Korean's system and Japanese. Since Japanese only includes one glide /j/, it is always written in the onset of a syllable as a palatalized consonant, rather than as part of the vowel. So while both languages share many sounds in common, the phonetic notations in Vocaloid can differ somewhat.

The Korean phonetic system distinguishes between 7 monophthongs, or pure vowels. Traditionally the Korean language contains 10 pure vowels that can still be heard in the speech of some speakers today: /a, ɛ, ʌ, e, o, ø, u, y, ɯ, i/. However, the vowels ㅚ /ø/ and ㅟ /y/ have become diphthongized into [we] and [ɥi] by the vast majority of South Koreans. While the remaining 8 vowels are still officially recognized as being distinct by the National Institute of the Korean Language, the vowels ㅐ /ɛ/ and ㅔ /e/ have also been merged into [e̞] by younger speakers, leaving the total of 7 vowels used in Vocaloid.

The vowel ㅓ is inputted as [7] in Vocaloid, suggesting that the IPA equivalent would be [ɤ]. However this is somewhat inaccurate as the most common and standard pronunciation of the vowel in South Korea is recognized as [ʌ] with the IPA.

Korean contains several raising diphthongs beginning with the glides /j, w, ɰ/; 10 of which are distinguished in Vocaloid. Similar to Chinese Vocaloids, these glides are included onto the Vowel portion of the syllable rather than split into two separate phonemes. For example, Korean vocaloids would input [ja], whereas Japanese and Spanish vocaloids would input [j a] to produce a similar sound.

All diphthongs beginning /j/ and /w/ can be preceded by a consonant. /ɰi/ cannot occur after a consonant, as it becomes /i/ in that case within standard Korean.

The Korean language contains 19 consonant letters. However many of these consonants contain positional allophones that can change depending a few factors. Most consonants change sounds depending on whether they are at the beginning or end of a syllable. Similar to Japanese, initial consonants become palatalized before the sounds /i/ and /j/. In addition to palatalization, initial consonants also become labialized before the sounds /o, u, w/ (and labio-palatalized in the case of /y/ specifically) However Vocaloid doesn't make distinctions for many of these allophones.

Korean distinguishes between 3 types of stop consonants: plain, tense, and aspirated. Other languages in Vocaloid only distinguish stops in pairs; voiced and unvoiced as in the case of English, Spanish and Japanese; and aspirated and unaspirated in the case of Chinese. This causes the consonant system in Korean to be somewhat misleading to users accustomed to the other languages as there is a mismatch between the same letters producing different sounds.

Tense and aspirated consonants can occur at the beginning of any syllable regardless of the preceding sound. Plain consonants however will assimilate into their tensed counterparts whenever the preceding syllable ends with a stop consonant.

The fricatives in Korean are /s, s͈, h/.

Korean Vocaloids only have two nasal consonants as initials, ㄴ [n] and ㅁ [m]. While the phoneme [ɲ] in the IPA occurs in Korean whenever /n/ is followed by /i, y, j/, Vocaloid does not make this distinction.

The Korean language technically only has ㄹ /l/ as an approximant. However in the syllable-initial position, this contains two allophones that Vocaloid distinguishes.

Neither of these sounds occur at the beginning of words in native Korean vocabulary. In the case of loanwords, [r] is the more common allophone word-initially. [l] does palatalize into [ʎ] before /i, y, j/ despite Vocaloid not making the distinction.

Korean has a total of 7 possible ending consonants, consisting of 3 nasals, 1 approximant and 3 unvoiced stops. Unlike other languages, Korean Vocaloids use separate phonemes for initial and final consonants, despite a couple of them being written as the same sound in the IPA.

The following is a list of additional phonemes avaible for SeeU. 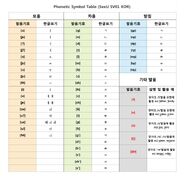