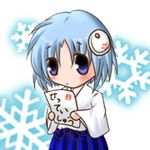 Kotsuban-P (骨盤P) (also known as KotsBeirne)'s first VOCALOID work was uploaded on September 25, 2007. However, this author has deleted works uploaded before "Setsugetsufuka" from Niconico by herself. This author's first hit song "StargazeR" became a base of many second created works.

Miku's "Append" module from the game "Project DIVA Arcade" used for the song "StargazeR" in the game Miku Flick.
Retrieved from "https://vocaloid.fandom.com/wiki/Kotsuban-P?oldid=1026364"
Community content is available under CC-BY-SA unless otherwise noted.