"LOL -lots of laugh-" is an electropop song sung by Hatsune Miku. In the song, Miku and a stuffed rabbit explore a surreal wonderland with lots of candy. It is heavily implied that Miku has simply lost her sense of reality or has fallen asleep (possibly both) while on her laptop late at night.

The song hit the #1 spot on the Weekly Vocaloid Ranking during week #100, the week of its debut, and did so again several years later during week #320 (to the surprise of both the Japanese and western Nico communities).

This song has entered the Hall of Legend. It is featured on the DVD Hatsune Miku DVD～memories～ and on the album Hatsune Miku 5th Anniversary Best ～impacts～. Additionally, it is the first track on the album Lots of Love.

This song was performed at the Mikunopolis in Los Angeles concert. 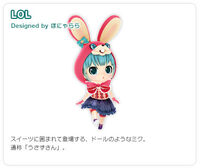 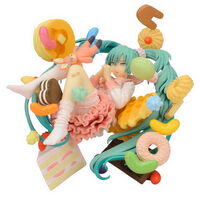 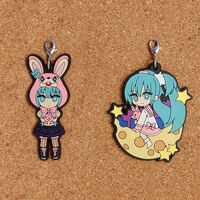 Retrieved from "https://vocaloid.fandom.com/wiki/LOL_-lots_of_laugh-?oldid=481455"
Community content is available under CC-BY-SA unless otherwise noted.