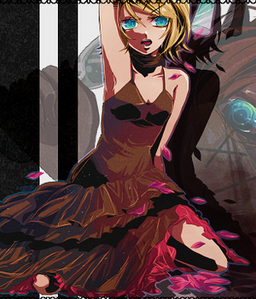 Lelele-P's 15th original work. It's also their second original Rin work, the first being "Spaghetti no Uta" / "A Song of Spaghetti". The song was uploaded after Lelele-P's five months hiatus of not uploading a Vocaloid work; and it has reached the Hall of Fame.

This is mainly a song where Rin tells her experience in dancing. She was allured (or even perhaps by vice versa) to a black haired man who she mainly sings throughout the song. There are several Spanish words (the title being one of the examples) used in the lyrics of the songs as well.

Retrieved from "https://vocaloid.fandom.com/wiki/La_Fiesta?oldid=945880"
Community content is available under CC-BY-SA unless otherwise noted.