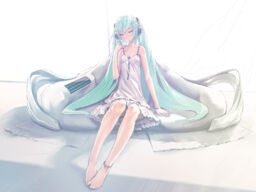 "Last Night, Good Night" is a song by kz, of the doujin circle livetune, featuring Hatsune Miku. Its official Niconico upload has over one million views.

The song is about loving someone before and after sleep, being the last encounter for that person. In the evening, you dream of the person you want to be with, and in the morning you hope to see that person again. Though conveying the feelings can't be done, remembering the person keeps them alive in you.

A reprint of the video on MikuHatsuneWatcher's YouTube channel has reached over four million views.

It is the theme for the 2013 movie "Jellyfish Eyes" ("Mememe no kurage"), Takashi Murakami's first feature film.[1]

Retrieved from "https://vocaloid.fandom.com/wiki/Last_Night,_Good_Night?oldid=945703"
Community content is available under CC-BY-SA unless otherwise noted.