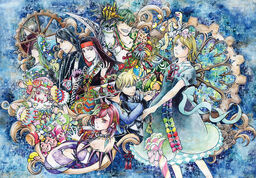 The story centers around Lydia, the princess of lead. Despite the fact that she is always wearing colourful dresses, she cannot see colours because her eyes are made of lead. On the night of a parade, Lydia made a wish to see the colours of the event, which was fulfilled at the expense of draining the rest of the world from its color. It turns out that a demon granted her wish, and it bargains that it will return the colours back to the world only if Lydia gives it her most precious thing in exchange. The problem here is that she doesn't know what the thing she holds the most dear to her is, and so she goes out to find it.

She ends up at a place called Kadoh-anna-ruk-A , where her search to find the thing she treasures the most seems to start.

The protagonist of the series. Completely colorblind due to her eyes being made of lead, Lydia longed for the ability to see in color.

Her most beloved thing is unknown. The point of her journey is to discover what it is so she can exchange it for the colors drained from her world.

It is unknown, as of now, if empress Philo is the empress of Kadoh-anna-ruk-A or another emprire.

Her most beloved thing is love.

Cash is an employee of Club Majesty, a place where people use money to sell their souls and be "happy" forever.

His most beloved thing is money.

A senior auditor. She believes the law is just and will do her best to prove when someone is lying in court.

Her most beloved thing is the law.

A kindhearted and hopeful witch, she was part of a revolution along with Sonia. She seemed to have a comfortable life before the revolution.[1]

Her most beloved thing is the soul.

Doctor Funk Beat is, what at first glance seems to be, a happy go lucky doctor that claims he can give everyone happiness but in reality gives everyone something for them to cope with their misfortune, makes them believe in their hallucinations, such as becaming a famous star just because they think they are one,[2] or gives them medicine,[3] and makes them think that it's happiness.[4] He himself seems to like seeing his patients suffer.

He seems to be aware of princess Lydia since he calls for her in his character song as if she is one of his patients.[5][6] When he finally meets her he helps her with her goal but doesn't seem to like her, and despises the fact that she acts like a tragic heroine.[7]

He has a lot of weird creatures in his lab. One of them is Genyas who seems to be his pet. He, Bluenote, Justin, and Peace are acquaintances; they all went to Arc-Jormu University together, and took part in a war when they were younger. He seems to find Father Blue Note annoying.

His most beloved thing is

A death god pretending to be a nun to get others to workship her. She seems to know of the Fräulein and Club Majesty[8]

Her most beloved thing is belief.

The only one that seems to be able to see through the sister's rouge. Has a strong believe in God and claims he can save the sister but gives up and asks for her to save him [9]. He used to be a hairdresser before devoting himself to God.

He, Funkbeat, Justin, and Peace are acquaintances, they all went to Arc-Jormu University together, and took part in a war when they were younger. He seems to find Funkbeat annoying.

A strong fighter and one of the people that started the revolution, in which her and Laika where in.[10] She is willing to sacrifice both herself and other's lives to achieve her goal.

One of the leaders of the revolution.

A junior auditor. He thinks the law is not just and doesn't seem to listen to the Fräulein despite the fact that she's his senior.

He, Funkbeat, Bluenote, and Peace are acquaintances, they all went to Arc-Jormu University together, and took part in a war when they were younger.

He, Funkbeat, Bluenote, and Justin are acquaintances, they all went to Arc-Jormu University together, and took part in a war when they were younger.

All tracks written by nyanyannya.

All tracks written by nyanyannya.

Retrieved from "https://vocaloid.fandom.com/wiki/Lead_Princess_of_the_Color_Stealing_World_Series?oldid=1038010"
Community content is available under CC-BY-SA unless otherwise noted.