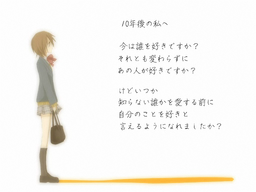 "letter song" is an original song by doriko.

Wondering where her life will take her, Miku leaves behind reminder questions for the "her 10 years into the future" to answer and see if she's changed and satisfied with her life.

This song has entered the Hall of Fame. It is featured in the album unformed.

Retrieved from "https://vocaloid.fandom.com/wiki/Letter_song?oldid=1195906"
Community content is available under CC-BY-SA unless otherwise noted.