Vocaloid Wiki
Register
Don't have an account?
Sign In
in: Hall of Fame, Original songs, Japanese songs,
and 2 more 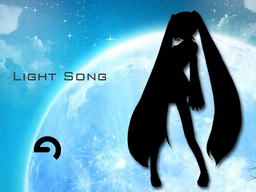 "Light Song" is an early work of well-known VOCALOID producer kz. It is an upbeat electropop song with intricately-crafted riff loops, like virtually all of kz's other early works. In the song, Miku recalls a past relationship in a fond but blurred "light". It is much like "Saihate" in the way that both songs are upbeat and in major keys, but have melancholy undertones. It is sung by Hatsune Miku preformed with vocals.

"Light Song" has entered the Hall of Fame, and topped Weekly Vocaloid Ranking #30. It is featured on the albums DEBUTANTE, KARENT presents Skylight Theater feat. Hatsune Miku, Re:Dial, and Re:package. A reprint of "Light Song" on YouTube has garnered over a million views. An arrangement of the song with vocals by yanaginagi is featured on PF AUDIO's album Cover of parallel filter.