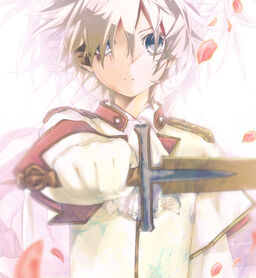 A few months after the original song's release FARM RECORDS released an album entitled VOCALO APPEND which features the track Lost Destination using KAITO Appendβ and all of Len's VBs. Three months after said album was released, 150P uploaded the duet version of the song; along with a revised PV.

Lost Destination tells a story of war and sacrifices. The beloved days and loved ones lost; wandering aimlessly, what "they" have searched for was lost, buried in sand. A "thing" that gives both corruption and happiness was what they seek.

Note that the "gibberish" in the middle part of the song is not latin, it's plainly gibberish and has no definite meaning whatsoever.

Retrieved from "https://vocaloid.fandom.com/wiki/Lost_Destination?oldid=1028331"
Community content is available under CC-BY-SA unless otherwise noted.