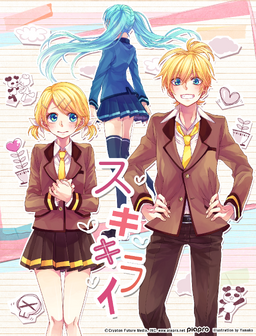 Love & Hate is a trilogy made by HoneyWorks, telling the story of three people in a connecting love story, yet not a love triangle specifically. Rin Otosaki becomes the object of the school's "Prince" Len Kagami's affections, and she is conflicted about her own feelings for him and can't decide if she loves him back or hates him. Len also used to be in a relationship with Miku Hatsune, a famous diva, but they broke up when she moved to America to pursue her dream of becoming a singer.

A novel was published October 1, 2013, illustrated by Yamako and written by Touko Fujitani. It's split into three acts: Love & Hate, Crybaby Boyfriend and Beginning's Goodbye.

Retrieved from "https://vocaloid.fandom.com/wiki/Love_%26_Hate_Series?oldid=959623"
Community content is available under CC-BY-SA unless otherwise noted.