In October 2011, the official VOCALOID CHINA Weibo account was launched, and was created to promote and cover information about VOCALOID itself. Within the first few months, most of the content were about the new VOCALOID3 products.[1][2] Inquiries in regards to a Chinese version of VOCALOID was acknowledged in November, but no information could be given at the time.[3] Later, an official website was opened.[4] On November 25, Shanghai HENIAN was established as a company, and was confirmed to work with YAMAHA Corporation and Bplats, Inc. in distributing their products.[5][6]

VOCALOID3 later received a Chinese patch in December.[7] In the same month, a contest titled "VOCALOID CHINA PROJECT" was launched to determine the design of the first Chinese VOCALOID.[8][9][10] It was noted that official characteristics, such as names, genders, and traits, were not established, leaving the creative details up to the participants' decisions.[11]

The contest ended on January 2, 2012.[12] The winning designs and the voice provider for the first Chinese VOCALOID would be announced at an event later in the month.[13]

On January 17, the winning design created by MOTH, Yayin Gongyu, was revealed in Shanghai. She was the top ranked design of 5 winning entries for the contest.[14][15] However, it was later found that one of the designs was confirmed to be plagiarized.[16] As this violated the contest rules, this design would be disqualified.[17] The official designs would later be done by ideolo and were expected to be shown in February.[18] This was later pushed back to March.[19]

In regards to an inquiry about the language of the VOCALOID, the president of Shanghai HENIAN, Ren Li, stated that the voicebank would only be in Chinese.[20] The final designs were confirmed to be revealed on March 22 through the official website.[21] The first Chinese VOCALOID's design was revealed and her name was confirmed to be Luo Tianyi. VOCALOID CHINA PROJECT announced that the promotional methods for their characters would be different compared to the Japanese vocals, in which the characters would receive their own official biographies.[22]

Tianyi and her demos were confirmed to be in preparation and would be ready around early June.[23] June 12 was the estimated release date given in the early VOCALOID3 era, but this was eventually pushed back to July 12.

On April 2, the voice provider, Shan Xin, mentioned that she finished her second day of recording the voicebank. On April 5, she finished recording Tianyi's vocals completely.

An animation for Tianyi was created and uploaded on June 5, featuring other VOCALOID3 mascots and Yuezheng Ling. The PV also had a singing vocal demo and the words "to be continued" at the end.[24]

On June 6, the full version of the song that appeared in the promotional video was released. On the same day, preorders for her limited edition was launched. The limited editions carried her VOCALOID3 package, a figure, an artbook, and a copy of her first album SingSingSing.[25] Preorders ended on July 5.[26]

Tianyi was later confirmed to be sold separate from the VOCALOID3 editor and not as a starter pack.[27] She was officially released on July 12 and information about the VOCALOID CHINA PROJECT cast was made available.[28]

On December 22, the full version of her first demo, "Step on your heart", was released on the second Luna Safari album, Miles: Smile.

Sometime after Luo Tianyi V4 was announced, her original VOCALOID3 version was taken off of Shanghai HENIAN's official taobao shop and could no longer be purchased. 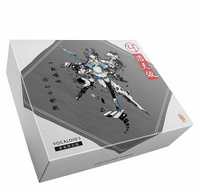