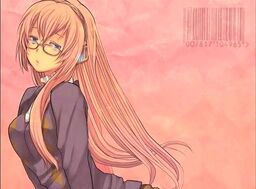 "Megane" tells of a girl who has a clear passion, or even obsession, with her collection of glasses, as does her lover. Megurine Luka sings of how her significant other often messes with her glasses while she wears them in a playful manner.

This song is featured on the FARM RECORDS' compilation album EX:P2 ～Ex:Producers2～.

"Megane" is a playable song in "Project Diva F".

A screenshot of the song MEGANE from the game -Project DIVA- f. 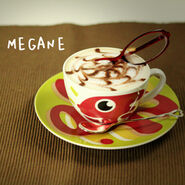 Cover of the single album on KarenT.

Retrieved from "https://vocaloid.fandom.com/wiki/MEGANE?oldid=975697"
Community content is available under CC-BY-SA unless otherwise noted.