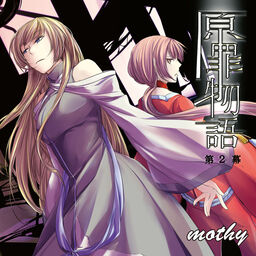 “Only one can become Queen”

Four candidates were chosen for "Project 'Ma'": Milky Eights (Miki), a prostitute; Ly Li (Lily), a noble woman; Elluka Chirclatia (Luka), a former priestess; and Irina Clockworker (Iroha), Elluka's future sister-in-law. With the ongoing need for a "Mother" (Ma) to birth the "Children of God", and that only one of them could become the "Mother" and ruler of Levianta, the magic kingdom, the four become cruel and distrusting, they begin secretly fighting each other in a game of survival at a temple.

Soon, rumors spread that Ly fell from a cliff to her death, though that may have not been the truth. After Ly's death, the remaining women became increasingly cynical and resentful. Later, another rumor spread that Milky hung herself out of heartbreak, though that was definitely not the truth. Not long after Milky's death, Irina approaches Elluka and tells her that she plans to forfeit, that she had hers and Kiril's, who is Irina's brother and Elluka's fiance, support of winning. Elluka thanks Irina and embraces her, promising to protect her. However, Irina stabs Elluka in the back with her knife, killing her. Irina breaks down crying, having grown close to her as her future sister-in-law, however she admits she harbors romantic feelings for Kiril as well and resented Elluka for stealing him away from her. With the other candidates dead and being discovered that she was the three women's murderer, Irina is selected as the new Ma. As she angelically smiles at the temple's altar, Kiril is targeting Irina with a knife among the crowd.

It was first released on mothy's Original Sin Story -Act 2- and was later featured on the Complete Edition before receiving its PV on May 4th, 2016.