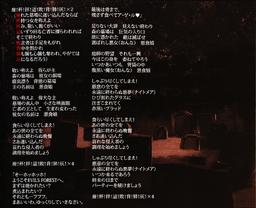 This song tells of the "Master of the Graveyard". It's sung mainly by her servants who demand that everyone must worship her and reveals that she's Banica Conchita who was reborn as the "King of the Undead". The Master the spots an intruder and questions them on how they want to be eaten and tells them no matter how long they'll stall, she'll devour them regardless. The servants cook the intruder and states that the end of all is upon them, but they'll keep partying until end.

This song is part of the Four Endings, serving as a leitmotif for the titular master. It is featured on EVILS FOREST.

Retrieved from "https://vocaloid.fandom.com/wiki/Master_of_the_graveyard?oldid=1005399"
Community content is available under CC-BY-SA unless otherwise noted.