Merchandise featuring VOCALOID has been a creative venture to further the promotion of a character by its company. This form of promotion keeps a characters popularity stable and gives fans the opportunity to own products featuring their favorites. There are various forms of merchandising such as: wearable apparel, video games, literature, and mobile phone products. Some merchandise is even fan produced!

Figurines featuring VOCALOID is most notable with Crypton's Hatsune Miku. They are heavily promoted by the Good Smile Company, known to create a vast assortment of products.

Literature featuring VOCALOID comes in a variety of genres. There is official material that focus on the purpose of VOCALOID such as music magazines and guidebooks about the software program. Other materials are created by fans and even producers, who have created fictional works based on a Vocaloid character.

Video games featuring VOCALOID have popularized in the form of what the software is known best for, music. Rhythm games such as Project DIVA have given consumers the chance to listen and interact with original songs featuring the vocalizing characters. 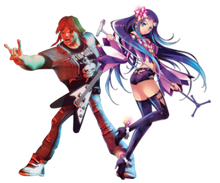 Want your community included? See how!

Retrieved from "https://vocaloid.fandom.com/wiki/Merchandise_directory?oldid=883182"
Community content is available under CC-BY-SA unless otherwise noted.