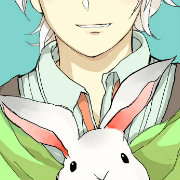 Mono-P, also known as Heibai-P (黒白P; Hēibái-P), was a Chinese producer who made her debut in April 2015. She was known to create electropop songs, and her works were described to be fast-paced and inspirational among fans.

Her song, "Your God", helped her gain notability within the fandom despite that its initial popularity was not high. Later works, such as "Zuò Yīgè Mòmòwúwén de Pǔtōng Rén Shì Yī Zhǒng Zěnyàng de Tǐyàn" and "Línzhàn Xuānyán", pushed her into the ranks of one of the most popular Chinese producers on bilibili. She was once a member of the Er Cha Group, but left in March 2017.[1]

In November 2017, "Qiú Lóng" was released and was the last song Mono-P wrote as a VOCALOID producer. She retired in June 2018. In August 2018, she became the fourteenth Chinese VOCALOID producer to reach 100,000 followers on bilibili despite her retirement.

Her birthday is June 6.