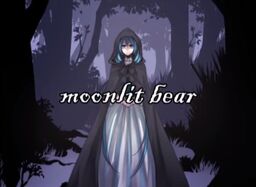 “On dark nights like this, scary bears come out”

This is the third song in the Original Sin Story. It follows the events that happened at the end of Escape of Salmhofer the Witch

It tells the story of Eve Moonlit (Miku) as she finds two fruits (Rin and Len) in the forest one night. As she takes them back to her husband, Adam Moonlit (KAITO), a bear starts chasing her.

When she finally gets home, Eve shows the fruits to Adam and, horrified, he tells her that their children are already dead and to return the children to their mother. Eve realizes that the fruit were children and starts to scream. Adam tells Eve that it's not too late and she can still return the children but she tells him that it's too late to do that as the bear is dead outside their house and was actually the children's mother, Meta Salmhofer (MEIKO).

Retrieved from "https://vocaloid.fandom.com/wiki/Moonlit_bear?oldid=976941"
Community content is available under CC-BY-SA unless otherwise noted.