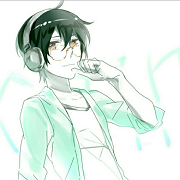 Moving Point-P, also known as Dongdian-P (动点P; Dòngdiǎn-P), Dingdian-P (定点P; Dìngdiǎn-P), and by his real name Hanguang Qin (秦瀚光; Qín Hànguāng), is a Chinese producer from Shenyang who specializes in electropop songs. He had been learning to tune since 2012 but did not make his debut until August 2015 with "Fēiyuè Wūtuōbāng". This song, along with "Sea for you" and his cover of "March Rain" featuring Yuezheng Ling, helped him gain notability within the fandom due to his high quality and nearly realistic tuning style.

In February 2016, his tuning for Xingchen's second demo, "Star Wish", helped the song gain its popularity. Since then, he often works in collaboration with Shanghai HENIAN Information Technology Co. Ltd. to create original songs for the Vsinger cast.

His notable works include "Fēiyuè Wūtuōbāng" and his cover of "Xǐjù zhī Wáng" featuring Yuezheng Longya.

His birthday is August 28, 1998 and he currently resides in Australia.