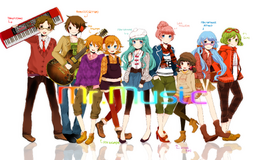 “I'm rerulili. I collaborated with all these favorite producers active on Nico Nico Douga!”
—Author's comment

"Mr.Music" is an original song by various producers. It is a song about wanting you to join the dance with them. It's also rerulili's first work with GUMI, Luka, and Yuki.

This song has entered the Hall of Legend. It is featured in the albums Mr.Music and VOCALO APPEND feat. 初音ミク.

Retrieved from "https://vocaloid.fandom.com/wiki/Mr.Music?oldid=971139"
Community content is available under CC-BY-SA unless otherwise noted.